Bangalore is perceived as a city-in-the-making, which contrasts with the idea of the city-with-a-past, history and nostalgia. However, this is the idea proposed by the governance in the recent years, which in turn believes in ‘development’ of the city as against a ‘relook’ at its own history. Bangalore is seen as a potential IT city in the elite sector due to the glory it is decorated with, from an outsider viewpoint*1*

Beyond the mean, limiting, amnesia-like thinking of the economically and politically potential agencies, about Bengaluru, as a futuristic city, there lies a history of its own. More than that, there are agencies and individuals already at work, digging out the history, myth and past of the city, as if to contrast and contradict the IT-governance.*2* In other words, the city of Bengaluru problematizes the clear divide between history and myth or doesn’t allow a smooth transition in between.*3*

An artist view of a lake in Bengaluru

The month long show of photographs of older Bangalore held at Rangoli Metro Art Center (April 2014), curated by artist Surekha, is from the collections of T.V.Annaswamy, Clare Arni, M.E.G Center among others. About fifty photographs are put up for the second time in a span of an year, which is a mixed bag of similar shows held earlier in the same galleries (Vismaya and Chaya), due to the overwhelming response to the earlier shows. The black and white as well as sepia images of past Bangalore are like a re-release of the popular Kannada films, which was a tradition-in-itself in the city. Festive occasions like Shivarathri, Ugadi, and Dussera were excuses for such re-releases of films. In a way, in this sense, the show recalls not only the past appearance of the city but the festive occasions in the past, which acted as a compulsive dias for such recalling. In other words, the yearning to watch the newly realized past of the city in the form of visuals has led to this repeat show, in a curatorial form. The history of the mythical days is what the show offers as nostalgia, rather than mythify the past.*4*

The photos of Bangalore of yester years are from the collections of the city based writers and photographers, ye the artists remain anonymous, by and large. The photos yield less to aesthetics and more to memories and memoirs. Since the photos are put up at Rangoli, off the once the main road of the city –M.G.Road — viewers immediately connect it to what lies outside. It recalls the museum of London at the heart of the London city. The photographs by and large have buildings, now sustained as well as demolished ones, but they speak more than they appear.

These photographs mark the landmarks of the city, some of them demolished and others modified. The greenery (in black and white), the rarely populated, spacious city makes even the existing ones as something beyond identification. Whether one looks ‘into’ or ‘at’ the photograph is teasingly proposed. Yet, by and large, most of the places, hospitals, palace, and administrative offices can yet be identified. In other words, viewers can surpass the blindness brought about by the current intense traffic, to locate the construction within the old photographs. This clarifies that most of the buildings in the photos are identified independently of their currently altered location.

What is it that we recall while watching the past of a visual around which we currently live? There is no set memory to identify them, films and literary texts about the city locations rarely exist owing to the multicultural/multilinguistic settings of the city. The nostalgia is a newly introduced theme to perceive Bangalore. Being absent in any documented form, older memories are contemporary oral practice passed onto from generations. What we identify as greenery in these photos are what is available to us, now, only when one climbs high rise buildings, which is on the rise now.

These visuals within these photos are anonymous, seen at well-known places like Koshy’s cafe and star hotels, either as photos or etchings. The photos/etchings at the Kempegowda Museum, just half a kilometer from Rangoli, on M.G.Road has a select, official view of the city’s important structures. The difference is that while the KM offers views of only historic importance, these at Rangoli demythify them thoroughly. If one keeps in mind that the city got its independence months after its country officially got it, the politics of representation, editing and presentation of the city to its own self seems very feudally controlled.

Even now, nowhere does one get to see a huge, old visual of Bengaluru throughout the city, despite being a city of huge bill boards, because the governance wants to abandon the project of recollecting the past. Past is for those who belong, not for those who long to be here for long and look forward. Luckily, the claim for homogenous and heterogeneous representation of the Bengaluru (between Kempegowda Museum’s permanent display of old Bangalore and the recurrent curatorial collection at Rangoli Art Center) does not mutually clash. In a way there is more than one Bangalore/Bengaluru. Officially, it seems, ‘Bengaluru’ is a wrong nomenclature, similar to the Kannada flag (red and yellow, the only unofficial State-flag in South India). Yet they prevail because alternative identities are born out of those yearning for nostalgia, with a strong public support which is to be considered as a parallel to constitution rather than something against it.*5* The Kannada flag, the recurrent appearance of old Bangalore photos, the absence of authorship to it (they are collected) together hold a potential to become pop-images like the sustained appearance of Shankarnag, the actor/director who still adores the auto rickshaws in the city, even after two decades of his demise. Like these photos, there is certain charm in the anonymity of the creator, the idea and the lack of a political will in the form of visual forms. In other words, these photos, like the flag and the phenomena of Rajkumar, have become public-mementos because they are not officially archived, like the history of the city which bleeds into the myth of the city. People watch these photos as maps of the time they are losing out, being and living in Bengaluru.//

*1* Interestingly, there is an urgency to bring IT sectors under ‘labor rule’, after the initial ‘sunshine’ period of freedom to take monarchic decisions of hire-and-fire, now, after a decade of its free reign from being subject to the labor rule. This sector has been the main reason behind the psychology of looking at the future of the city; and more so, not to take its past into consideration within which social justice and caste-appropriations are inherent.

*2* Writers like T.V.Annaswamy, Aliye Rizvi, Rajegowda, Suresh Moona, photographer Clare Arni as individuals and the Department of Local History (lead by Indira Chowdhury, at Srishti School of Art and Design), M.E.G photographs (Madras Engineering Group, which was responsible for building major constructions of old Bangalore and documenting them), ICHR (lead by Dr.S.K.Aruni) are some researchers/institutions working towards this. The fact that facts themselves are jeopardized speaks about the lack of coherence in between them, which has led to the bleeding of intermingling between ‘myth as history’ and ‘history as myth’. However, on a positive note, the beginning of this avant garde movement to historicize a city while it has been perceived as a yet-to-become city is noteworthy.

*3* One of the myth about Bangalore is that there was already a township called Bengaluru before Lord Kempegowda built the city of Bengaluru ‘upon’ it. Also, Roman coins have been found in Yeshwanthpur (north west of Bangalore) giving a hint that the city might have been an ancient trade route or center. Facts are scattered, with an old school of interpretation, lacking in a mutually agreeable decision even about the fact that history could itself be diverse!

*4* This, the show and its essence, is occurring at a time when such a mythification of the past is being orchestrated around by groups of Kannadiga identity, which also have specific political appearances and vague definition of the past. For instance, an appearance, an image of the personification of the Bhuvaneshwari Devi, the Goddess of Kannada/Karnataka/Bangalore (as its capital) was created as late as in 1999 by the artist B.K.S.Varma towards such a project, to project the city as that of Kannadigas, which is far from a factual survey. Nevertheless, the factual/mythical idea that the capital of a State doesn’t have the language of that respective Indian State spoken in majority in the city is an interesting point of debate. While it leads to bouts of aggressive provincial nationalism in places like Mumbai, it has lesser impact in Bengaluru.

*5* Dr. K.V.Narayana argued that icons like Dr.Rajkumar, the veteran actor, becomes ‘the’ cultural leader when there is a lack of one such personality in the political system. (in one of his seminal essays called “Raajakumaara”, published in an anthology of essays from Hampi Kannada University, Hampi, a decade ago.// 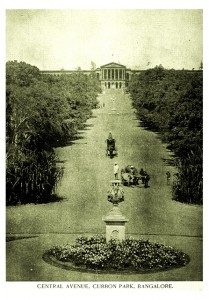 (Article published in Art & Deal art magazine, Issue.71, Vol.10, No39, May 2014, Edited by Siddharth Tagore/Paramjot Walia, Art Konsult, New Delhi. It is a contemplation of the relation between the city with a past; and its availed archive, during the occasion of a series of old, black and white, archival photos exhibition and dialogue about Bengaluru, organised at Rangoli Metro Art Center galleries by its Curator Surekha. Also available at: http://artanddeal.in/cms/)