Performative-Photos of Bengaluru: Gaze and Historicity amidst City’s Blinding Future 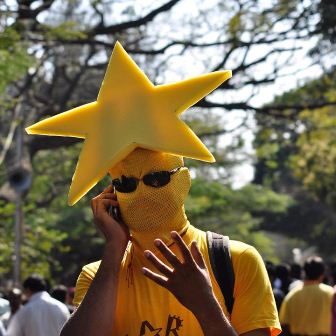 Incident 1: A couple of years ago, I saw a performance by Suresh Kumar at Bar1 (Bangalore Art Residency). He sat down in a small room full of audience, in the backdrop of scores of pairs of slippers, put down his head and began to knit a thread around his calf muscle. It was only the focus of the official video camera that indicated who the artist was, ‘for those who came late’*1*  Otherwise, more than many audience were busy scrolling their mobiles or switching it off or silencing it throughout or taking others’ assistance to switch it off for them. “This knitting is the hero of the performance; and this is going to be the beginning, the content, the form and the end of this act”, responded a cynical artist friend, who went out for a smoke, as and when the performance was happening. He proved it right, nothing took place other than the performer putting his head down in concentration and knitting throughout, monotonously. It was already half knit when the act began and seemed half knit when it concluded!

The audience dispersed once the performer got up and went out of the room. There was no indication of the end, like it was with the beginning. This was confirmed once the actor came back after half an hour with a freshly shaven head. “Was shaving your head a part of this performance?” asked that cynical friend, to which the reply was, “you should have guessed and followed me!”

Incident 2: As she, an artist, entered Sumukha gallery (Bengaluru) as an audience to a performance, she was confronted by the artist friend-performer seated in front of an old typing machine. “You are a stranger to me. What is your name, where do you come from, why are you here?” was the essence of the question she posed, ready to type the answer. When the audience-artist answered her name wrongly and intentionally, the performer insisted, “are you sure that is your name?” “Yes, why are you doubtful?!” came the answer from the bemused audience. That gave away the performance and the performer’s intentional, in a way. The baffled performer was shifting positing from being a ‘friend of the artist’ as well as a ‘performer’ enacting a stranger’s role. Finally the latter won; and typed the pseudonym that was given.

Incident 3:  A young enthusiastic artist once posed this self-introspective question, “I feel the urge to paint. But seeing all (meaning ‘most’) of them jumping into performance, I feel like performing. I am split between what I want and what I should cater to. Funding agencies like IFA and Bosch seem to equate contemporaneity with a disregard for the convention in art.”

These days he creates in both the mode!

Incident 4: When Suresh was performing in the first incident, the cynic friend continued his commentary about the performance. He had observed the head of an artist-run-initiative in Bengaluru vigorously shaking his right leg and contemplated as follows, “what if the performer, instead of knitting the thread around his own leg, shifted it over to this person’s shaking and shivering leg? Would it not be a happy and gay collaborative performance?” Obviously the cynic-artist-smoker was playing the role of a devil’s advocate.

Performance, in visual arts, is a display of the artist’s physical self, as it is visible (only), from within the limitation and possibility of photography. It is not a mere coincidence that such a performance became intense, as a twin to digital reproducibility. Watch any performance i.e. photographs-of-performances, the audience is visible and verbal, as inevitable participants. This is because the ‘performance-photographer’ is always a newcomer to this mode of perfo-presentations. The performance-photography and its author, in this case, cannot bifurcate the performer from the audience-performance, no matter how well orchestrated/controlled the performance is. If it is an outdoor performance, their photographs become the most spontaneous document of the worldly occurrence. It erases any possible differences between the ways the performer poses from that of the almighty’s performance.

Hence performance is actually ‘performance-photos’ in essence (not to be confused with ‘photo-performances’, though the latter shares a genetic connection). The audience, no matter at which point of the performance they are being represented, look generally clueless and it is this cluelessness which is primarily documented in any given performance. Being clueless is also being away from white cube and its ritual of ritualistic behaviour as well (Carol Duncan). No matter what the nature of performance is, the audience is mute, often literally, even when they mumble absurdly. The audience mumble is also integral to their spontaneous mute performance, as is visible/hidden in the still photographs. The mumbling itself is because of the way the various performers’ varying acts uniformly are repetitive, monotonous, insular, use predictable materials like threads, distribute eatables (Mangala Anebermath, Prakash), powders (Smitha Cariappa), among other things. This mumbling prioritises still photographs over video about performances. In an article*2* I have argued that performances are basically performative-photographs, trying to distinguish the conventional role that they perform while being used in modernist galleries and museums. Also, observe the Facebook uploads of performance/performative-photos of Bengaluru. Most photos are liked; few shared but (almost) never commented upon. The ‘muteness’ inherent within the whole process of online sharing supports my argument that the essence of these performances are mainly contained in being metamorphosed into stillness. This is one collective, yet subconscious effort to distinguish them from what the general public spontaneously categorise them into: street plays, practical demonstrations (as the ones that would occur in art schools as well as political ones, for which Vatal Nagaraj-like personalities are known for. His protest against Mutalik and support to Pink Cheddi campaign is a reigning example.)

The performative-photos happening in Bengaluru since last decade is a subversive reaction and reflection to the tradition of artistic demonstrations evident in the art schools of Karnataka, since independence. It resembles street plays and politically motivated occasions, specific to the city.*3* However, there is a larger scheme of things happening around performances. The tradition of city-specific-multiply-intended-performers addresses the issue of gaze. The city is known for its visibility being squeezed, added with an increase in its noise-structure: congested roads, traffic jams at any given time round the clock, increase in the noise-of-the-city due to traffic as well as the habit of listening to FM radio/music during driving.

Hence the thematic concern of the performative-photographers (producing ‘performance-photos’) is to treat the subject of their individual performances as an excuse. Their concern is collective; and their collective concern is to disconnect themselves from the burden of history of resemblance (with the tradition of performers). Hence all the performances, despite their mutual differences and disagreement to what is being said herein, aim at concluding as performance-photos and give way to a novel gaze. This is a gaze which is born historically simultaneously to that evoked by surveillance cameras, installed recently in the city as a safety measure.

The performative-photos’ gaze is to produce a sight which refutes distinction between the viewed and viewer, the performer and audience, the act and absence of narrativity, specified duration and monotony. The artist visualises his/her shyness while performing*4* These artists don’t give a vision to the city in a classical tone, but present a case of visibility, vision, visuality which is that of a self-doubt. Problematizing the gaze is to commute the idea of becoming mute. It is not a mere coincidence that Bengaluru, with maximum varied migrants and recent exodus of the North-East Indians, is losing sight of its earlier yearning for a Hong Kong-like personality. Its vision has metamorphosed into an immediate addressal of visuality in hand. The local history and its makers seem to have become a sensational theme availed to these performers, through the excavation of the city’s visual-history. *5*The performance/performance-photos, hence, are a new yet shy visuality and gaze offered by these performance-artists to the city which is blinking to retain its own older appearance, to gain a new one; and stay sincere to the available facts about itself in a visual form rather than a verbal one.// 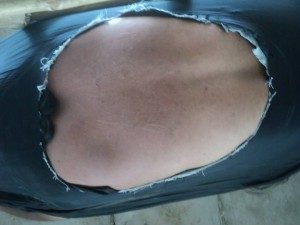 *1* As the daily Kannada newspaper Phantom comic script would instruct. The audience is generally clueless about the beginning and end of most performances that have taken place in Bengaluru. It is at this point that the conventional relation between the performer, audience and the documenting camera gets jeopardised.

*2*Read: “Reflections upon ‘Performative-Photos’”, www.cartanart.com, uploaded on 5th May 2014, edited by Johny M.L. and editorial coordinated by Sushma Sabnis.

*3* For instance Vimochana group of CEIDS has been holding protest against women, every Thursday evening, at the Town Hall, dressed in black. A.S.Murthy — the son of A.N.Subbarao who established the first art school (Kala Mandiram, 1919) in independent India – has set a record in the number of street plays he conducted in the city. Vatal Nagaraj is known as a demonstration-politician. The venue in front of Gandhi statue and facing Queen Victoria is officially reserved for demonstrations (near Chinnaswamy stadium). A particular actor dressed variedly, every day; and can be seen at Ravindra Kalakshetra. In other words, the new breed of performative artists has to distinguish themselves from such a baggage of seemingly similar tradition of performances/performers.

*4* From Smitha Cariappa to Dimple Shah, Suresh Kumar to Mangalamma, the shyness of the metaphoric surveillant view-point is a strongly emerging attitude.

*5* The first phase of Bangalore history were in the form of written documents. The second phase was to opt to become a progressive city; the third one was collecting and exhibiting the history of the city in visual forms (mainly photographs of old Bengaluru, from the collections of the likes of Clair Arni, T.V.Annaswamy, etc). Read: “Reviewing a ‘City in Transit’: Constitutional Parallels’ by H.A.Anil Kumar, in www.haanilkumar.com, originally published in “Art & Deal” art magazine, Issue.71, Vol.10, No39, May 2014, Edited by Siddharth Tagore/Paramjot Walia, Art Konsult, New Delhi. 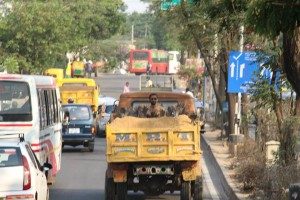