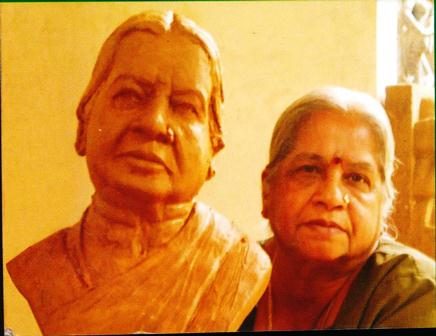 Perhaps this is the first lengthy autobiography written by an Indian sculptures in any Indian language. The book runs to about 250 pages, with equal number of black and white photographs and a few coloured ones. One can read this book about a visual artist without the help of the pictures, but that would be making us blind.

Books on art in Indian languages, by contemporary artists, autobiographical in nature – are rare not by accident but are seemingly intentional. Kanakamurthy (b.1944) writing is in par and often better than those art journalistic writing in Kannada. There are about one hundred and twenty autobiographies written by Kannada writers. Arguably, the main literary discourse in this language is so blind that this remarkable volume would not be inculcated into its survey or bibliography. Its haunting to foresee right now that such a significant work would go missing. Wish I will be proved wrong.

The book, apart from narrating her own story, includes the design as part of the writing. Lalitkala Academies, from the State or National level, would be hesitant to publish such writing, complementing the latter. It could be due to the deep rooted subconscious patriarchal attitudes. 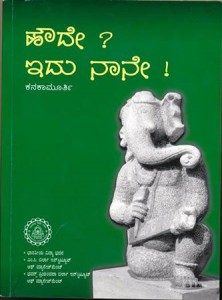 Kanaka, a landlord’s daughter, was puzzled as to what to do after her graduation (BSc) since “I was dark”. She often wondered who would marry her and why she is dark when “most girls from Mysore are so fair”. She makes an excuse to come to the city of Bangalore, to cook for her younger male sibling’s, while the latter are getting educated. There she studies at Kala Mandira (older than Santiniketan art school) and then finds a guru in sculptor Vadiraj. She takes a vow – according to agnisakshi — to be a sculptor throughout her life; and incidentally gets married to Mr.Murthy. Her problem with colour ends in a way and also begins there, since she would be romancing grey stones for a life time.

Kanaka writes spontaneously. Particularly her narratives in the first half of the book and about the first half of her life gives a hint at an epic novel that could be in the making, about a dark women sculptor from South East Asia.  She openly admits that cynics commented about her relation with her tutor, the easiest point of attack upon artists who are women. “Why do people disagree to install divinities in temple, since because it’s sculpted by me, a woman?”

Kanaka points at the dilemma and irony that she had to carry — like her chisel — throughout her four decades of career as a creative person. She was assisting her tutor Vadiraj for four decades; and claims that sculptures done after his demise alone as ‘her own’, from past two decades.

She dispassionately writes about the pros and cons, as if they are equal. The memento they gave her in a function, while honouring her, was a sculpture made by her! The language, style and size of the sculpture she has created were inevitably connected with the way she circulated them. They were small format images, reproduced, and sold outside the academic and white cube premises.

The similarity between Ravi Varma, N.Pushpamala and Kanakamurthy is that people stumble at the images created by them, even without realising their authors. The sculptures in front of Bharatiya Vidhya Bhavana in Bengaluru, the Right Brothers’ sculptures in Vishweshwaraiah Technical Museum, Kuvempu’s sculpture in Lalbagh West gate are all her works. We don’t go after but stumble upon them! 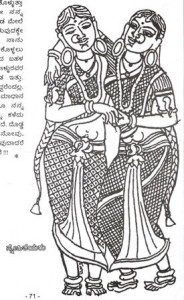 The book can be divided into two parts: the initial part is a sociologist’s delight to delve into the socio-political-racial-linguistic background that framed artists in Karnataka, since post-independence. In one such incident, she narrates how her youngest sister was hell bent on getting a bigger banyan leaf to eat in, was provided with a 4’ wide leaf and she relished upon eating in that leaf by literally walking from one to the other end of the leaf!

The latter part of the book is mostly factual details about most of her relevant works. She intensely points out at the issue of an aesthetic part, specifically pertaining to her mode of making and circulating her images. Many commissioned sculptures were rejected because they were not ‘smooth enough’. However the same men were kind enough to re-allocate another work; while other philanthropists bought away these works. Men have been integral part of her success, while she hosted a lonely battle as a woman, made conscious of being coloured!

Kanakamurthy’s autobiography is follows a tradition that is specific to a particular Kannada literary tradition of narrating the life journey of more than one, mutually associated personalities. This book is the tale of the writer, her guru, her husband, Vidhyabhavana and many more. The book is a delight, one could read this book as a narrative as well. However, in the end there are essays about Kanaka, some in English as well. She has intelligently pitches these articles in comparison with her own writing. Wish the book gets translated in English, in a condensed form though.//