She was attracted to the Indian food, prepared by an Indian cook from Kundapura, at Tokyo. She learnt cooking alongside getting a degree in art and design from Tokyo University. The taste of both culinary and aesthetics perhaps became inseparable to her in such a way that she came all the way to Kundapura in order to redefine and revive her taste-buds, when she was a budding artist. The place, lifestyle, habits and especially the language of the land caught her attention as well as imagination. As a result she underwent a master’s degree education in visual arts from the College of Fine Arts, Chitrakala Parishath. In the due course, she not only learnt Kannada, but all her paintings in the current show contain phrases in Kannada words and written in Kannada! The show by Japanese artist, Megumi Sakakida, at Rangoli Metro Art Center, Bengaluru is called “My Indian Life” (‘Nanna Bharatiya Jeevana’)!

Megumi’s pictures are basically narratives, like say those popular Japanese comic strips, yet seem autobiographical. Some of the exhibited original sketchbooks split and reunite the viewer’s sense of taste – they look like cook books, recipe books as well as autobiographical verbal-visual jottings. Married to her Indian classmate Deepak D.L, she is engaged in bringing about a happy marriage between two different varieties of taste, spread out between cooking and painting. 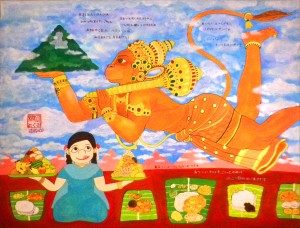 All the paintings, drawings and sketchbooks in the show are about what Megumi’s perceives as Indian life. Unlike a European traveller, she came here as an Asian traveller, had tie-ups that modified her traveller-ship into a migrant, both in citizenship as well as the way food and food-for-thought commix. Her not-too-big and not-too-small paintings are rendered in watercolour that somehow further allows this ‘transparent’ exchanges between the felt, tasted and viewed realities of the country to which she visited in order to attempt to become an insider.

When she paints what she sees, she invokes the representational device she has inherited. In other words, she measures things Indian with a Japanese yardstick, with a belief that the yardstick will somehow metamorphose appropriately to measure that for which it is not designed, thinking in a nationalist mode. This is how ‘diaspora’ meets ‘nationalism’ in her works. 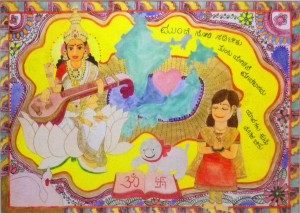 The current series of Megumi’s works – the Indian series –is about the comfort zone that she finds, picturising the Indian family life, its mythology and its popular culture. In fact, her works don’t mutually differentiate these three. When Hanuman flies with the Sanjeevini Mountain, the artist’s-self in the painting lifts two plates full of Indian meals, with a certain satire intact. However, this becomes a self-mockery, because the extreme of her pictorial language is subtle, stops before it turns into caricature. What seems to be a visual documentation of a Japanese traveller in India turns out to be a self-doubted test. Is Megumi representing India or is she documenting the length and breadth of the comfort-zone within which she fits in comfortably? The joint family, the comparison between Indian and Japanese food, the descriptive events of a rural life solely reserved for the foreign-eye is what captures her sight. She paints what she loves and likes it in the way she is visually used to, as she is trained back at home.

In other words, the artist neither does look at India as an outsider nor insider, but as a dispassionate observer (some of her artwork titles mean ‘your marriage system’, ‘Indian food, Japanese food’). The watercolour rendering she uses is always contained within definite outlines in all her works. This is analogous to looking at India-as-it-is but always contained through the visual representational device of the classic Japanese art. Perhaps, the harsh realities of what she would have witnessed in India – not many of them are there, since her personality and the tone of her works resemble in being sober – is not rejected but emerges as subtle humour, bordering the caricature, at times.

In her imagination of India, she has discovered an experiential world where in Gods, food and rituals collide, as if they are all made of the same fabric of semblance, without the undercurrent of a hard-core Eastern philosophical bearing of all things made from the same matter. This lack of serious pretentiousness, commixed with an easy will to fluent representation – like professional cartoonist writing directly with pen, without a sketch – works meaningfully for Megumi, just because of not acknowledging or internalising the extremities of Indian customs, rituals, religions as well as weather!

Compared between her paintings and sketch-books, wherein the latter is as serious as the former is considered to be, the latter is impressionist, jovial and time-specific. Always equipped with a toy-animal, Japanese/Kannada wordings in all her drawings/paintings, Megumi altogether wraps the skin of graphic novel around even the iconographical visuals that could be a litmus test in the age of the evolution of the right wing. If one keeps in mind the liberty that marginalised art forms enjoy in relation to the classic/mainstream, here is an artist who has understood the true pulse of such a bifurcation; and brings in a happy marriage in between them. For the time being, her attempt as an Indian bride and a Japanese artist could be imagined as ‘Hanuman in Ukiyo-e’s Avatar’//