The Feel of an Art School — with Love, Forever

The feel of an art school campus plays a major role in orienting framing the personality of a learner, which, ironically many learners don’t seem to acknowledge acknowledge. K.G.Subramanyan had written about the ambience of Kala Bhavana in one of the Nandan issues. The term ‘feel’, a combination of teaching quality, infrastructure and accessibility is ‘felt’ but not ‘explained’ in all its totality. However this is not sufficient to explain as to why it becomes a unique experience to read Sherlock Holmes in London or Da.Ra.Bendre’s poetry at Dharwad. Our explanation is always junior to our experience, due to a choice we make. We prefer to not acknowledge, as to how we feel what we feel!

Chitrakala Parishath in Bangalore, for instance, is a place which contains extremes of such a feel. Either it is crowded with the crafts people in an art school premise, when it is rented out for melas; or one can pleasantly feel the rising heat of Bengaluru as a veil around one’s back, when it seems empty and haunting. Interestingly, the attendance of students reaches all time low when the crafts mela is on within the premise. Perhaps our experience demands an external pattern as appearance, to decide how it should be felt. The one thing I felt while learning at Royal College of Arts, with a scholarship, was a simple occasional desire for a flash of Indian summer and a cup of tea round the corner in the Khaakaa’s street chai shop. Even the royal queen and her husband’s omnipresence and command could not have fulfilled it. The feel of coffee at the café in Kiasma contemporary museum at Helsinki would always indicate that whatever is about to happen lie outside its building, amidst the people yearning for the sun, on the main road called Mannerheimkatu; and not inside the museum. All structures, cemented or metaphorical, resist an explanation to the experience that we just had in art premises, despite its very feel itself being true.

Although the fact that most Indians intellectuals are left over from god’s grace, the subtlety of profound silences, felt and not heard, within epistemological premises, are not easily discarded. Just like someone spoke about London as male and France as female; and Bengaluru lacking in culture while Mysore had one (U.R.Ananthamurthy, among others), all art campuses have a nostalgia, which becomes part of a feel and never the other way round. Trivandrum art school has the feel of a museum converted into an art school. CAVA art school in Mysore, despite a metamorphosed modern art school from a technical institution, has the feel of a kacheri (a government office). Fine arts faculty in Baroda M.S.University, after the infamous Chandramohan incident, has the feel of a phantom-pain, to pounce upon at any given point.

Nobody comes to Venkatappa gallery in Bengaluru while just a few hundred feet away, the new Rangoli Metro Art Center has a foot fall of thousands of visitors on any weekends. The artist after whom Venkatappa museum is named, himself was such a solitary person, that he would demand that he had to meet and see each and every one who saw each and any of his artwork! The haunting feel at this museum and Venkatappa’s biographical details do not go beyond the consideration of being a mere coincidence, in the dialogue to rectify the lack of audience to its premise. Yet, nobody comes to the place named after the artist who wanted to artistically confront each and every one of them who wanted to watch his talent!

When a French critic said that he is looking at the eyes of the person who had faced Napoleon eye-to-eye (his brother) that statement is more than a mere descriptive analysis of someone’s portraiture. A colleague of mine would narrate me, time and again, about how eerie the sculpture department at Kala Bhavana would be, whenever he sculpted alone in the department in the night time. Is it something that not lonely people but also collective mob could feel, yet never acknowledged, say, as it happens inside any cave at Ellore at dusk, on any given day?

Does it mean that art students of different age group feel a particular place, differently? It is a haunting of an artistic kind that makes us feel awe while watching an artwork. It is the same feel that is subdued and silenced while experiencing campuses. Consider the Louvre for that matter. The experience that one goes through late in the evening, after the famous museum closes and after its people disperse, while seated in the park in front of it, makes you believe that ‘Monalisa’ is inside and the ‘Nike of Samothrace’ only guards the former. Parta Mitter re-narrates Marco Polo’s experience of confronting the mammoth Bamiyan Buddha at dusk time, while being unaware of its iconographic relevance. 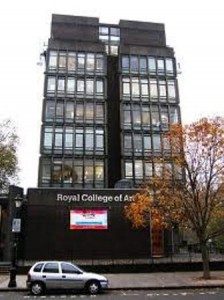 The plot of the film “Night at the Museum” was arguably developed by someone who would have gone through similar feel. What would those original royalty felt, who, while being and living within the current Louvre building, would be aware that their privately guarded space would one day be crowded throughout the day and haunted by artworks throughout the night, in the future? The feel would be something more devastating that realizing tha feaudalism would be replaced with democracy.

Ken school of arts is a place within which its founder R.M.Hadapad literally lived and died, in Bengaluru. One had to go through the classrooms to meet him at his residence, before being laid to rest, the penultimate rites were conducted in the very classroom he built; and before that, outstation students literally stayed in the classrooms at night. One cannot ‘see’ the school, only the roof is visible from the surrounding high-rise post office, swimming pool, market, maternity hospital and police station. Yet, everyone feels the presence of many including who-is-who had been there, even after two decades after graduating from there. The feel is that it was a homely feel around which a certain art school existed, almost as an excuse. Most art schools, which are old and seasoned, problematize the relation between ‘feelings’ and its ‘contents’: facts, experience, ambience and history. However, the sum total of all these do not help deconstruct the feel of experience while the experience of the feel stays back at us, free for our liberal interpretations and interventions. //