(Travel essay about Nandi Hills, Bengaluru, published in www.travelanddeal.com, published on 31st May 2014; edited by Siddharth Tagore and Paramjot Walia. All photos by the author)

‘Tipu drop’ is a famous spot on top of the Nandi hills station, from where king Tipu used to drop culprits. Located 60 kms to the north of Bengaluru, it compulsorily rains in the city when clouds accumulate on top of this hill. Nandi to the city is Himalayas to India, in attitude and geography. The new address to this hill is that it is also 30 kms north to the new Kempegowda International Airport (KIA). From this angle, the farming spots around the hill looks a real estate agent’s ‘Mechanas Gold’. Tipu, when he ruled the city, it seems, used to drop the State’s enemies from that drop, which was/is steep. There is a renewed joke about it: one of them, who was about to be dropped, protested with a different reason. “I am not afraid to fall and die, but don’t like it below, it’s getting too hot and am going to miss the cold here at the top” he seem to have said. Obviously, he was dropped for telling the obvious truth, this time for telling it to Tipu, instead of to the enemy king! As the fellow who was dropped said it, the drop in the temperature of Bengaluru, though in a reverse order, is in a way warming up to the phenomena of global warming. The more the city gets hotter, the more is Nandi Hills in demand for its cool temperature. In my childhood days, I saw the vehicles, then rare though, moving far away from the city to Chikkaballapura, the next district, from the top of Nandi; and completely mistook it to be tiny play vehicles and not the big-ones-at-a-distance! May be that is the reason I came into visual arts and have been coming back, time and again, to Nandi hills, since few decades – in order to rectify the perceptual misconception! This is my favorite spot and my favorite anecdote to respectively show and narrate to all those whom I take there, whether they listen or not. Some act very concerned, “Do you still feel them small or you have grown up?” they insist. 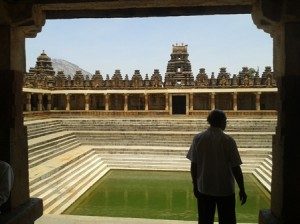 Kalyani in Bhoganandi temple, at foothill of Nandi

Among seven hills, Nandi hill was converted into a hill-station by the Botanical department of the British government. The news that Gandhi stayed here is not only factual but has become legendary, like Rama and Sita staying and walking in various places, throughout the country. One thing for sure, all of them had big, six foot lengthy feet and the rocks became sand when they stepped upon it. That’s how their footprints are visible everywhere, bigger as well so that even myopic people can see through their presence. The ten thousand people who flock Nandi throughout the weekends want to convert the trees into sand – they write their names every possible where; and write the name of those whom they can’t be without, next to those names! At one time ‘Tipu Drop’ was so infamous for committing suicide that when someone tried to jump from elsewhere, he was ardently instructed by a Nandi Hill fan, “Please jump from Tipu Drop only. It’s worth the money; and the experience is unique and unrepeatable, believe me!” Since Kannadigas (people staying in Karnataka) want to travel rather than turn their homes into travel places, they dropped the idea of converting Tipu Drop as the right spot to embark upon a journey-of-no-return. Even if someone is half dead after jumping from here, route to either the foothills or the top is so complicated that he/she will spend the rest of his/her (left over) life reaching it.

It is so cold up in Nandi that the gates close at 7pm sharp everyday night, not for the fear that otherwise someone is going to die of pneumonia. One should book the rooms inside that gate, to stay overnight, to happily drink beer in the government guest house and to more happily watch the jewel-like lit villages below and the runway of the KIA airport at a distance. May be Tipu should have dropped that pun-filled pundit in night times, with warm regards, because the one who was dropped could have easily caught the flight directly from the runway to heavens. Shankarnag, known to the rest of the country for his direction of ‘Malgudi Days’ Hindi tele-serials, wanted to construct a rope-way to Nandi hills from top to bottom, or even the other way round. The road accident which killed him when he was just 37 also killed this project as well in 1992. In the Kannada remake of Devanand’s ‘Jewel Thief’ film, Raj Kumar points out towards the city from top of Nandi hills and says that, “Once I am the king, this is my kingdom”. Most climax scenes of Kannada films, wherein the villain or vamp are dropping the male or female child from top of Nandi hills and the hero or heroine is holding on to him or her and kicking the villain or vamp – were all shot in Nandi hills. People come to Nandi hills to see it from a distance while arriving; and come to see the surrounding districts, after having climbed it. Once on top, the horizon surrounds the hills like a circle, all around. The sun set is not seen only in the west but its effect on the eastern horizon leaves an illusion of the penultimate moments of sunrise as well, like the midsummer of the Nordic countries! Nandi Hills is the cooler as well as the rain harvesting system to a field called Bangalore! Dawn or dusk is the right time to be at Nandi Hills. If you have seen the dawn over here you are a healthy person, because you got up to the early morning mist so earnestly, willingly. If you have seen the dusk over here, it means you are well connected and can afford to overstay, legally or otherwise.

Kalyani in Bhoganandi temple, at foothill of Nandi

The only way you can climb Nandi is to drive or get driven, with a drive to sight-see. There are altogether seven mountains like this, while only Nandi is put to use. The Bhoganandishwara temple at the foot of the hills is a thousand year old Hoysala-Pallava dynasties construction, that mischievously but brilliantly contests the mystical fact that those two dynasties always punctured each other’s royalty. May be they had a time-out session, wherein they together partied on this hill! The guides, very few of them, tell you these and other stories for a pay which imitates the process of alms-giving. The temple has exquisite carvings a photographer’s delight; a kalyani (water tank) very pleasant for-your-eyes (only, not to take a bath). From this temple, Nandi Hill looks like heaven, if you keep in mind the fact that that is exactly the aim of any temple – to show you heavens. One needs to drive around the hill, to reach the top, in a clockwise direction, which is almost like driving in the ghat sections, for about 9 kms uphill. Often the truck drivers driving back from Nandi hills are seen getting down from their vehicles and helping out private car owners, to drive upwards with a particular knack. If the drivers or the directions are reversed in such cases, the private vehicle owners who drive can come down walking and collect their vehicles at the foot of the hills – for, the vehicles would have travelled without an owner/driver, just for a change! * The mood on top of Nandi hills is always engrossed by the meticulously planted greenery by the botanical department. The varieties of saplings, flora and fauna, distantly owe gratitude to the German, Mr.Krumbigal, the garder-expert who turned Bengaluru into a garden city. There are no specific places to visit ‘on’ Nandi, but one can move from a temple, to a hotel, from a plantation to a bus stop, over there. All that is to be seen is ‘outside’ of Nandi, as if Shiva is seated on Nandi and watching kailasa all around him. Physically fit people walk all the way from the city to the foothill of Nandi on Shivarathri festive evening; and climb Nandi almost counting the steps. Those in the farm lands all around Nandi sell grapes, cucumber, guava, flowers to the visitors on the highway. The farmers are/were the sellers without a mediator. However, now they are more privileged – – the real estate people visit the farmers in their own abodes, to buy the farm land and convert them into resorts, industries and similar public sectors. This is only if some agricultural land is still left over, without being already sold for similar purposes!

Nandi hill is half a kilometer drive from the northern edge of Bengaluru. This was the hill which was visible from any high-rise building in the city in the 70s, when such high-rises were rare. You see Nandi in one whole form, as if it is intricately composed and connected. On the other hand, Bengaluru, seen from Nandi, is like a being distorted and fragmented due to disorganized planning and demonic ambitions. For those who break their heads in matters of town planning of the Metro, Nandi is an ideal place to chill out. Or, there is another myth about Nandi: no matter how suffocating the city of Bengaluru is, it seems pleasant only from one point – i.e. when seen from Nandi Hills!//