The Art of Chandranath Acharya: Left to a Right Choice 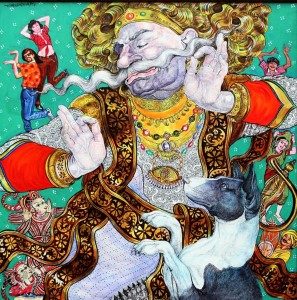 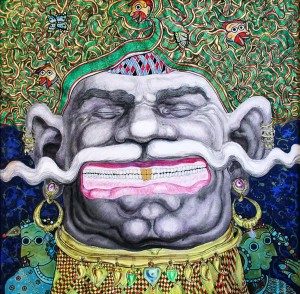 The thrill of skill is what has been ‘kill’ed by the deep misunderstanding that ‘rendering’ and ‘skill’ are one and the same. No amount of argumentative skill can convinced the already convicted, otherwise. The problem of Chandranath Acharya, the artist, is precisely this; and the possibility of Chandranath Acharya, the illustrator, is also this! The magic of his image-making lies somewhere in between.

Look at his track records: most students of art (schools) from Karnataka have been copying his watercolour-mythological-illustrations more than learning from their tutors, for at least past four decades. While doing so, they have discarded the charm of the very tutors who were his tutors as well! Being bestowed with the best of the State’s award (the prestigious K.Venkatappa award, given to milestone achievement as ‘artist’, that doesn’t split a creative person hierarchically as an artist or illustrator), he re-invented the appearance of Aryans and Dravidians in the mythological illustrations that he created for the Deccan Herald group of publishers in Bengaluru over the decades. In a way he tries to reconstruct the past, which is not nostalgia; but an idea to reconstruct the past for the sake of the future.

Chandranath’s contribution to art history is this: just a while ago, the forms of illustration and mainstream art were not different in the art of Karnataka. M.T.V.Acharya, S.M.Pandit was the protagonists of this kind. After the great divide, which unfortunately positioned Chandranath and the like (“he could have had been the best printmaker in India, if he had made up his mind” said the printmaker Sanath Kar, his mentor from Santiniketan, once), he attempted to reclaim it.

What ‘charms’ the skill-lovers among his imitators is his ability for condensing skill, beyond any easy deciphering. There is a consistent gap between what Chandranath ‘imagines’ and what he ‘depicts’. This is a technical and technological gap on one hand and this imagination of how his picture looks, when condensed and printed on paper, on the other hand. His training in graphics at Santiniketan in the 80s must have facilitated him this sense of visualization. The perceptual (and hence ethical) shift between the painter and the illustrator is precisely this: when those who were writing and drawing with paper and ink had to shift over to keyboard and joysticks, respectively, they had to go through this specific perceptual jerk. It was specific, to those who were creative during the initial advent of the hypertext, during the arrival of the PCs. Chandranath, who was at the height of his career as an illustrator, cover page designer (the best of the Navya Kannada writers, from both the opposition faction of right and left wing, like S.L.Byrappa and Yeshwanth Chittala, respectively, opted only for his cover pages) during the arrival of the digital media, found it an apt dais to reclaim his position as an artist. About 75% of the covers of the books on display in any Kannada book stalls had his cover pages then.

It is not the occupational hazard that I am pointing out about Chandranath but how this very spirit of shifting over from reality to the virtual devices facilitated him the reclaim that position of being an artist, whether he creates art, or illustration or design. The charm of his works to those who copy him comes as a riddle and there is this constant perceptual jerk at its core.

Chandranath himself might not and doesn’t want to agree to the simulated effects of his works nor to the art historical positioning of him in a wider and larger theoretic context. After a while, which was as long as three decades and graphic, watercolour, printing and drawing media, he has come back to painting, as a self-conscious choice, in the recent years. In other words, here is an artist who is opening his own sight to his own canvas, learning to unlearn as to not take his own pictorial space as a preface to the one that is to be printed out! In fact, he practically has solved certain art historical issues. However, the catch 22 situation is this: He repositions a pre-modern position of various media being on par with each other. However, during the picturisation of the Aryan as white skinned, sharp features during the translation of textual mythology into the visual ones, he currently faces the crucial issue of how can save his representation from becoming a potential publicity material for the right wing, like the works of his contemporary artist, B.K.S.Varma has willfully agreed upon. The smart cartoonist in him as well as the cynical-satirist attitude that he has, might save him at this point. At the same, those who imitate him continue to imitate him clueless, being unaware of the swaying ideology that his works have been inheriting, between the left and right politics//