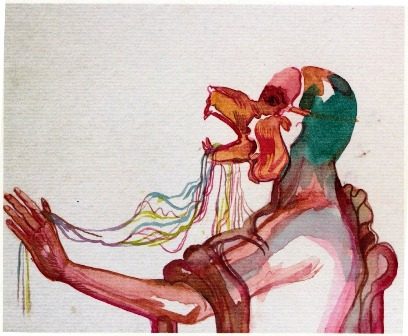 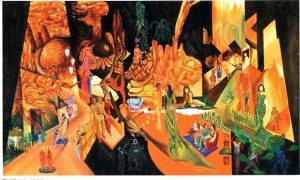 When the epic novel ‘Malegalalli Madhumagalu’  (bride among the valleys) by Jnanapeet awardee Kannada poet Kuvempu was adopted into a theatre play by Basavalingaiah, last year, in Bangalore and Mysore, the one aspect that everyone agreed was the ‘epic scale’ of the theatre production itself! This was despite cynics saying that the similarity ended there. The play was a 9 hour long, throughout the night, with 150 characters, with four lengthy acts in four different venues; and three short intervals. People had to physically walk along from one to the other location at midnights, like those haunting dark figures that appear within the play at certain points. One of the discussion about the play held at ‘Samuha’ art forum (by Suresh Kumar G), later, itself stretched to a length of two and a half an hour.

Vast lengths, elaborate timings and mammoth efforts are at the heart of Dwarakanath H.K’s (b.1963) first major solo show held recently at his friend Suresh Jayaram’s 1Shanthiroad in Bengaluru. It was already a decade and a half since he had a show anywhere, one decade of efforts in making this show possible; and it was the two decade old friend who accommodated his creativity, for the show. Not so very coincidentally, Dwarakanath was the set designer for the epic-mega play ‘Malegalalli Madhumagalu’, like he has been with most of Basavalingaiah’s plays. Hundreds of his supporting sketches were projected as a backdrop to – not the epic play –the dialogue that was held around the play! Dwaraki, after his formal education in arts from Baroda M.S.University, went straight on to the stage, literally, to become a background designer at Mysore ‘Rangayana’ theatre repertory (of B.V.Karanth’s fame), came to the fore as an effective actor in ‘Krishnegowdana Aane’ (Krishne Gowda’s elephant, that was hosted some 80 times), an adaptation of the play by Poornachandra Tejaswi, the Modernist Kannada writer and the son of Kuvempu! The length and breadth of theatre personalities, scripts and events that Dwaraki has experienced over two decades have themselves metamorphosed into a thematic ‘scale’ in his works. Even cynics might not say that scale is the only common point between these narrative paintings and Dwaraki’s role as a theatre background artist, over the decades.

What reminds after confronting his figures are innumerable figures, almost all of them anonymous, as in a crowded place, like, say, the works of Bates Lowry. They are not as anonymous as the circumstance they are in. 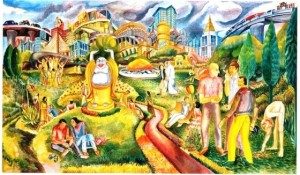 Each of Dwaraki’s paintings have so many figures, uniform in appearance that it seems that the same genderless person is seen in various places, with camouflaged appearances. It’s our desire to be others, given a chance to be otherwise! Every object, ‘architectural detail’ and ‘outdoor scene’  in the ‘painting’ are ‘painted imageries’ of a ‘theatre set’ that has in turn been appropriated from ‘real life’. The figures are still, recalled memoirs of what was enacted as a play, an event. Both the formally directed plays and the unedited, untold stories of the personalities behind the actors are commixed together in these paintings. Owing to the popular history of Rangayana, if you know the plays, you tend to identify the characters in his works, which is deceptive. The uncut, unedited and (more so) untold event to which such an actor succumbed is what is revealed herein; and this doesn’t exclude the artist Dwaraki himself! 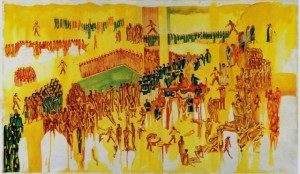 Dwaraki is a rare painter. As a formal-artist he paints rarely; and rarely keeps away from round-the-clock routine of painting the theatre, any given day. The actors as well as the theatricality of the stage are what seems to be his concern at first. On a second thought, this disjuncture, this fragmentation, the separation between visual and theatre are the ‘collaged premise’ from within which Dwaraki seems to pick bits and pieces of his own autobiography of last two decades. There is a special aspect about artists hailing from Karnataka, in their late 40s now – they studied enmasse at Santiniketan and Baroda in 1990s, were separated from the premise to which their predecessors meekly had submitted themselves to, back home. At the same, they spread out to all novel areas like curatorial projects, residencies, commissions – three terms most of their predecessors hadn’t heard about. Dwaraki, an inevitable member of this group, has brought out a biography of this two generation of artists’ in his works. It is a lesson to theatre: for the first time, the background visual stage decoration has taken the focus lights upon itself. The differences between the two art formats, with an inevitable hierarchy are eased out. Dwaraki’s experience, seasoned acting and painterly skills, introduction to the process of adaptation of literary texts into theatre – all in all refuse to arrive at a negotiative aesthetic compromise. Dwaraki paints exactly this – the refusal of a compromise but an agreement for a fragmented, staged life of socio-political development at the cost of empowerment.// 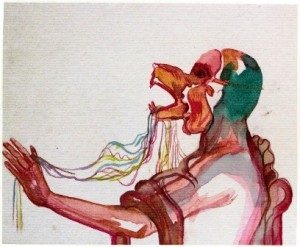