How is it! Photography, today?

As of now, people might still believe in good and bad photography but the faith in a genuine photograph will always be suspected, seemingly forever.  –Anon

Photography, today, is a term for a definition whose functions have clearly crossed the boundaries of its own set conventions. Photography, initially, was a technology-facilitated-media, to serve as a ‘documentary apparatus’ so as to serve the process of the making of history. Within this process, photography framed the very anatomy of ‘documentation’ itself, post printing era. This is the classical understanding of photography and close to the definition of classic photography. One of the prime functions of photography was to document the world-as-it-is, while defining what documentary means, in the very process!

Hence this is a media which contains the representational freedom as well as feeds that freedom to the limitation of technical gadgets, while its conventions were gradually but firmly grounded on ambiguity. Being in black and white was colorful during the days when there was factually no colour in photography (red blood in black liquid in achromatic photos and its leftist implication, for instance), later on arrival of colour to it the same monochrome was altered of its meaning from ‘colourfulness’ to ‘being nostalgic’. As a result, the possible relation between leftism and nostalgia—two definitions for the similar appearance of photography in an un-reversible historic time span–was not established through photography. Hence since the day one, photography refuted permanence to the notion of its own ‘definition’ unlike say, the media of painting for instance. 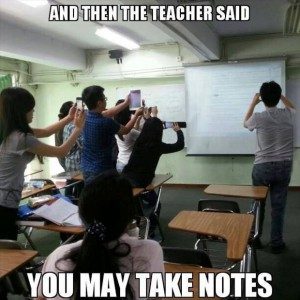 “And Then Teacher Said You May Take Notes”, from Facebook, 2013

As the general belief goes, to alleged claim that negative-based-photography is loosing its charm, honour, classicism etc. could also be similar to the elder generation being dissatisfied with their 3Gs (third generations). Photography post-negative era, in the digital age, has not been yet accepted on its ‘own’ premise. This is analogous to the way Mannerism of Renaissance and Postmodern of Modern were treated. They were—like digital photography—meant to be subversive versions of their immediate predecessors. What I mean is that just like digital photo is always gauged in comparison with negatives-based-photos, the classic quality of the latter is gauged only by pitching it against the chronologically latter digital ones. And currently, photography, by and large, is extremely conscious about this great divide between the analogue and the digital.

“In a Contemporary Antique City” by B.S.Shivaraju, 2013

If this attitude towards photography could be translated into a sociological language, feudalistic attitude towards democratic demand will always be feudalistic, while democratic demand to do away with feudalistic representation ends up as a populist culture! This has been the story of the journey of photography from negative-age to digital-age. In other words, photography today is clearly ‘bifurcated’ between those that appear today as ‘resurrected photographs’ and those that are originally digital. The grandfather resurrected to his youth, while standing next to his young grandson who has accepted the agedness of the former onto himself, represents the overall outline of photography, today—a genealogical essence of the Yayaathi myth*1*

Those faded and worn out black and whites were turned into crystal clear images (only) because of the digital apparatus. The result of what is being shot, today, is immediately available to sight and rectification; and further could be re-rectified through editing. Hence there is no more a bad shot, while there are plenty of shot-images which surpass any sanity of ‘being-photograph’. Since there is no bad shot, obviously even the notion of the ‘good’ in photography also doesn’t exist. Being-photograph earlier, involved a certain distancing between good and bad photographer, between two shots clicked; and between professionalism of the professional and an amateur. While accepting the fact that bifurcation between the analogue and digital exists, is relevant and controls the fingers that clicks, such a bifurcation or divided-imagery has become unique to this specific technology-turned-aesthetic media. As of now, people might still believe in good and bad photography but a genuine photograph will always be suspected, seemingly forever. The latter (digital) is degenerative while the former (analogue) is already turned into antique. In this background, ‘how’ is it photography, today? Before addressing this issue, one should not forget that today’s media that is interlocked with contemporary photography, immensely feeds on classic-negative-based-photography. Re-circulation of old photography of older people, when they were young, published in ‘face’book, is a case in point.

This is a hazy divide of a clear prejudice. It resounds the ‘bifurcation’ that was brought between the art of painting and photography, immediately after the latter was born. ‘What is the use of (realistic) painting when photography can capture/picturise what the former does, easier, faster and more economically?” was the essence of that question. Many answered it, while some anti-realists have even maintained it alive even to this day. There could have been a choice of perceiving the latter as a continuation of the former; and yet that did not occur. It was so because the common meeting point of both painting and photography—reality—went on altering. Perhaps photography was the first media which altered (largely due to its technical nature) the perception of reality as that which not only occupies space but also time. This should be grasped in the background of the fact that representational media like graphics, sculpture and applied arts are not mutually bifurcated but are only differentiated! In other words, newly born representational media is always pitched against its predecessors, if both attempt to address ‘reality’-mostly within the art educational premise. If a media has reality written all over it, it is bound to be pitched against an earlier existing one, which attempted at similar reality! Reality doesn’t seem to be comfortable accepting more than one media at any given time in history.

Photography is a true technical extension of human senses because it shares the latter’s limitations. The world beyond five senses was availed to human experience for the first time through close-ups and ‘still images’ of an ever altering and mobile world. It is a common tourist technique to zoom in one’s camera, shoot those unclear street names and immediately watch them further zooming in on the screen so that you save walking across half a kilometer with tired legs, in the wrong direction, because of photography! Such photo-based domestic facilitation is followed by artistic advantages: the 3G (third generation) of art students have altered the practice of on-the-spot landscape painting with photo-shoots, for instance. Apart from constantly pledging acceptance as ‘art educational’ media, which seems to be an ongoing project forever, photography has affected artistic creation and perception, beyond being accepted as a media for aesthetic representation (Boyd Webb’s Photo-sculptures, for instance).

“The Wrapped View” by Niranjan Hosmane, 2013

Photography today includes too deviant and variables while it still hangs on to a classic nomenclature. Photography is used ‘as’ many entities in varying fields while in art, images are often used ‘as’ photography. Photography is used as a documents, testimonies, evidences, domestic proofs, identities among other things. However, the currently evident great divide between analogue and digital photos is obvious because of its usage ‘as’ aesthetic imageries. For instance, when press-photographers hold exhibitions, the ritualistic behavior pattern about photographs (penciled titles, names, edition numbers, and printing on acid free archival papers) so much inherent in the art gallery-language might seem alien to them. Both are into photography, are acting as agents of the great-divide, yet claim ignorance about the divide. Interestingly, historically, this divide occurred after the Berlin-wall-divide was withdrawn, the Iron-curtains of Soviet Russia was melted down; and while North-South-Koreas continue to withhold them. This analogue-digital divide in photography—that too in an age of inter and multi-discipline of immense range—is perhaps triggered by such geographic divides as well. Photography somehow resembles the proven scientific nature of light: it seems the light behaves both as a wave particle and a straight line, simultaneously, when nobody watches it (note the impossible irony about it). At least this can be used as a ‘relative’ metaphoric analog to the divide between photographic categories.

In other words, the community of photographers seems to wish to watch their products at a close-up range rather than be positioned on a larger area of experiential perception. A photo, today, refutes a clear definition due to its diverse preoccupations (both ‘as’es, something-as-photo and photo-as-something), in fields both within and without artistic premises. Its overall history involves being a documenting apparatus turned into being an active player within the aesthetic/representational premise, only to spread out into too many areas of perception and governance. In the due process, has photography already budged even the defined premise of the contemporary representation? Someone should seriously sit on that retained great-divide of photography and gleefully have an overview.//

*1* According to the myth of Yayathi, youth is made to travel backwards in the chronology of the system of geneology. The essence of contemporary photography resembles this in the sense: what is perceived today as photography is different from ‘photography-today’! Today’s photograph, technically, is mainly digital while contemporary-photography includes (but is not overall) digital, without being apologetical to the classic methodology-of-photography. For instance, measuring the quality photograph in the 70s compulsorily included certain ‘awe’ evident within photography which was due to ‘fate’, ‘luck’, ‘magic’ and ‘timing’. These four were the virtues which have been modified into ‘editing skills’ now that are taught in the form of web-formations. Apart from being its own self, digital photography also means ‘demythifying analog photograph’. The post-production of analogue photography has become an integral part of defining the digital ones, just like the aged-old-ness of Yayaathi is youth-shifted-from-father-to-son. Earlier, a photograph was complete in the dark room while today it is complete only when one of the ‘multiple possibilities’ of the shot image has been ‘re-worked’ on a PC. This incompleteness/open-endedness of digital photo remarks upon the negative-based-photography, by subjecting those as well into current day ‘format’ions.//